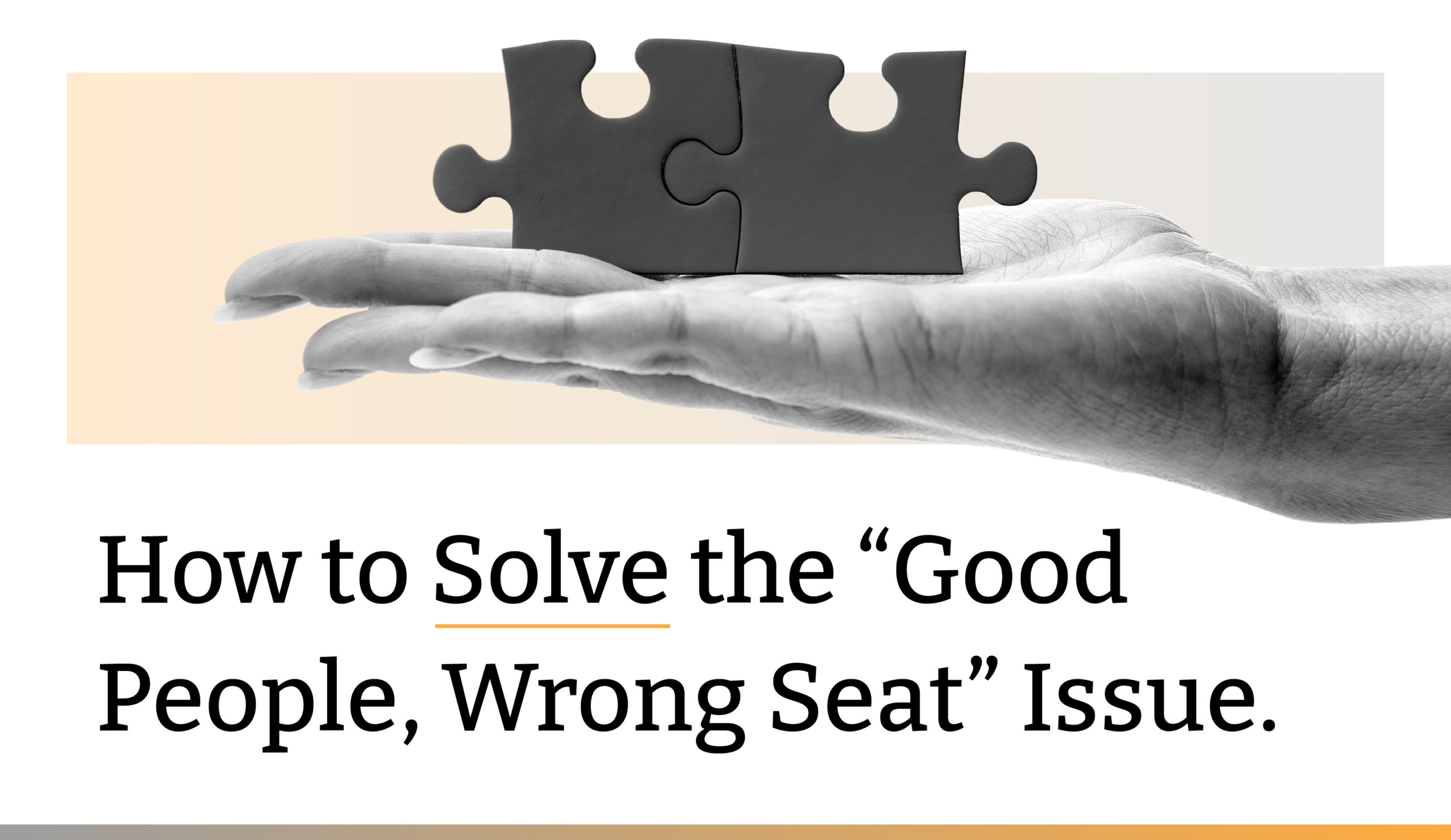 We needed to have a hard conversation.

“First of all, we love you as a culture add here. That’s the good part. But this next part, frankly, is going to be harsh: you haven’t been performing to your role.”

He nodded, eyes down. He’d just heard a hard truth, but he knew it was right.

“Now, we all already know what you’re good at, but I want to hear it in your words. If you could choose to fill any existing role here at Scribe, what would it be?”

He shot up in his chair he was so excited. “I’m good at writing and building relationships with people, and I do a good job of moving our projects along. Maybe I would be a good fit for the Copywriter position.”

“I absolutely agree that you’re amazing at building relationships and overseeing projects. How about becoming a Publishing Manager?”

He tilted his head, the way people do when they hear something they never considered before. It was the right choice for him AND the company—it was just a matter of whether or not he’d take it.

When he first joined our Tribe, he performed well. His role was new, and in that chaos he appeared to have a handle on it.

But as the company grew around him, and other departments cleaned up their acts, it was obvious that he hadn’t grown with the role—so it was time to move him to a new seat.

You know the phrase: What got you here, won’t get you there.

Well, he wasn’t getting there, so we asked him to move to a new seat.

I’m always blown away by companies that promote a person for years, then when that person hits a wall they immediately show them the exit. We don’t do that at Scribe.

If someone has spent years with our company, they’ve acquired a lot of knowledge about us and how we work. Why not continue that relationship?

Now, we DO NOT make up new roles for people just because we like them. But if someone isn’t performing, our first step is to see if there’s a better fit for them somewhere else.

Still, no matter how much we all love him and how much of a culture add he is, he still has to drive Results (it’s a core value of ours).

Hence the hard conversation. Let’s take a look at that conversation, line-by-line, to see EXACTLY how I handled moving a good person in the wrong seat to a new seat:

“First of all, we love you as a culture add here. That’s the good part. But this next part, frankly, is going to sound harsh: you haven’t been performing in your role.”

But notice that I was still straightforward about the bad part. I didn’t sugarcoat it, I didn’t dance around it: I told him bluntly that he wasn’t performing.

“He nodded, eyes down. He’d just heard a hard truth, but he knew it was right.”

The only reason he didn’t explode was because we’d already had conversations about it before.

Any time we move somebody laterally, down, or out, we NEVER do it in the first conversation.

We had already given him a chance to improve. Two months before, we had let him know where his performance fell short, and what he needed to do to fix it.

In the best case scenario, he would have worked hard to get better after that conversation. He did work hard, but his Results didn’t progress like they needed to.

Even though he didn’t improve, the previous conversations still set the expectation that he’d have to level up to stay in his role.

People have to know when they’ve dropped the ball, not only so they can improve in real time, but also so they aren’t surprised when we have the kind of conversation I’m breaking down for you in this post.

“Now, we already know what you’re good at, but I want to hear it in your words. If you could create your ideal role at Scribe, what would it be?”

Again, I framed the question from the positive perspective, letting him know that everyone already sees his talents. But giving HIM the opportunity to not only brag about himself a little, but also tell me what he wants to do.

I framed this as him carefully crafting the role for his specific skills, which was true.

But here’s the secret: we already had a new role in mind for him based on his talents, but letting him think about and arrive at the answer on his own gave him more ownership over it.

He shot up in his chair he was so excited. “I’m good at writing and building relationships with people, and I do a good job of moving our projects along. Maybe I could do something with content writing.”

Now this part was a little more difficult. He was right about being good at building relationships and moving people through our process, but content writing wasn’t his strength—it was the skill holding him back.

People usually know when they’re not performing, but they can’t always identify WHY.

In his case, he wanted to be a writer so badly that he didn’t see his deficiencies.

If someone lacks self-awareness about their skills at work, it’s our obligation as a Tribe to make them aware.

However, the “changing seats” conversation is not where we do that. He’d had that conversation with his direct support before, so, again, I focused on the positives, rather than diving into the negatives.

“I absolutely agree that you’re amazing at building relationships with people and overseeing projects. What do you think of becoming a Publishing Manager?”

I agreed with him that he’s good at building relationships and moving projects along because it was true, not just to tell him what he wanted to hear.

As the leader of a private company, I am not here to create roles just to keep people on board. I leave that to the government—they let incompetent people stay on for YEARS.

We can’t keep someone just because they’re a good person. There are a lot of good people out there. My duty is to do what’s best for the Tribe. If that means asking someone to move roles, then we do it.

Even if we have to ask them to take a salary decrease.

“That sounds amazing! I’d love to be a Publishing Manager.”

He took on the role—that was the easy part.

Any time you take money away from someone’s household—which is what you’re doing when you demote someone, exit them from your company, or even move them laterally—you have to address that in the conversation.

I explained in detail exactly how this would look in his household: they’ll have less money to go out to eat, they might not be able to afford that second car, and there might be fewer Christmas presents under the tree.

“But there are benefits to this change: most importantly, I know Sarah [his wife], and Jennifer [his daughter] will have a husband and father who is much less stressed, and much happier. That’s better for your entire family.”

If he had stayed in his current role, he would have either gotten fired or quit, which would have been even worse for his family.

After explaining exactly how this change would affect him and his family, I then explained the other side of the relationship: why it was best for the company.

Very politely, I told him that this is a two-sided relationship, and the company could only afford to pay a certain amount for the value of his role.

“I understand. I still want to change roles.”

This was another commitment moment in the conversation. If he wanted to leave the company, he would have done it after I offered a new role, or when I explained the salary decrease.

That’s a conversation we had to be willing to have.

Even though he accepted the new role, he still felt anxiety about knowing where to go from there.

That’s why it was so important to give him a clearly-defined path for growth at that moment. He could see that even if he switched seats, he could still grow, which is a huge comfort in a moment of uncertainty.

I didn’t give him a chance to say “But where do I go from here?” because I answered it BEFORE he could ask it.

Again: we focus on the positives of the change, while still being blunt about the negatives.

It’s easy for someone to change seats when that new seat is a promotion. But it’s hard when you’re exiting someone or moving them laterally.

He took the new position, not because it was a promotion, a demotion, or even a lateral move—it was an entirely new role for him that was perfectly crafted to his skillset.

He made less money at first, but he was immediately happier and more successful in his new role.

In fact, he was so much better as a Publishing Manager that I promoted him within months. At that point, he not only made up that $15,000 salary cut, but he was already making more than he did in his original position.

He was happier, his family was happier, and the Tribe was better off, all because we moved a highly-skilled person out of the wrong seat and into the right one.