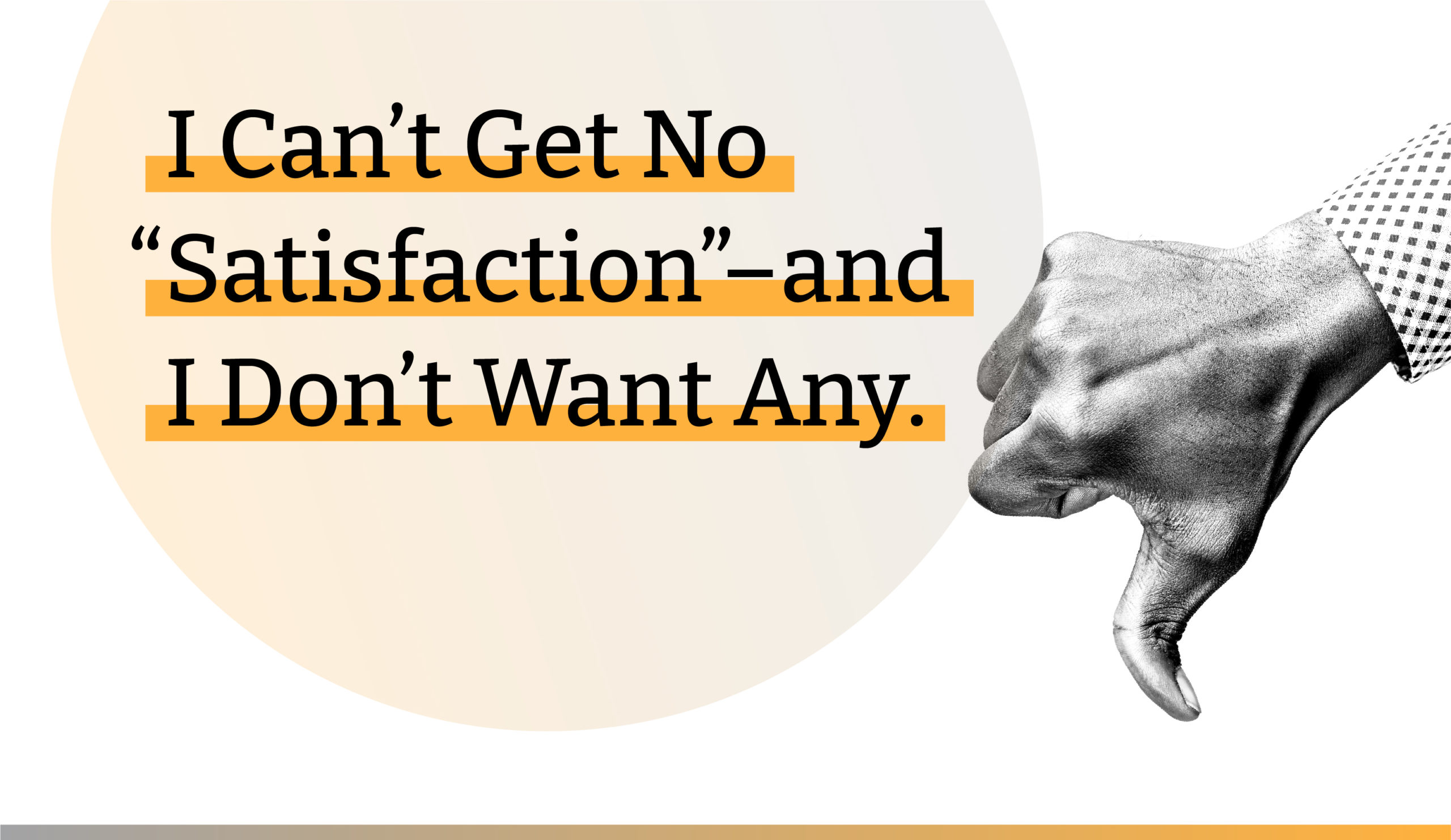 I could give a damn if my team is “satisfied.”

Let me give you some context.

In one of my previous leadership roles, I was speaking with an employee about how I wanted to create an environment where people were so fulfilled by their jobs that they wanted to spend the next thirty years there—to possibly even retire at that company.

A look of relief washed over his face.

“That’s such a relief. It’s so much pressure off my shoulders. I thought I needed to start looking for a new job.”

“My guidance counselor told me I should look for a new job every two years,” he answered.

I told him that was some of the dumbest shit I ever heard.

However, in retrospect—I get it.

I’ve worked with so many people—some in our Tribe—who have come from corporate environments where the culture was one where they wanted people to be satisfied with their jobs.

Who wants to only be satisfied—with anything?

Still, this concept of “satisfaction” being a great thing is all around us—even in our everyday lives.

How often have we filled out that survey that gives us a range from “extremely dissatisfied” to “extremely satisfied,” whether it’s about work or a customer experience we’ve had?

It’s no wonder people feel the need to switch jobs every couple of years. Why would they stay somewhere where they’re merely SATISFIED in a job where they spend forty-plus hours per week?

I always seek to create a culture of fulfillment for the Tribe. I want them to feel fulfilled in their work—never satisfied.

I don’t want our team to look forward to “hump day” and say, “Thank God, it’s Friday.” I ask myself how we can make them excited to come to work on Monday.

If I make them feel as though they’ve got to trade two days for five days, then I have failed them as a leader.

It’s my responsibility—not my team’s—to ensure they are fulfilled in their work.

Now, a lot goes into feeling fulfilled at work, so I’ll talk about just one aspect.

We constantly examine how to create a culture of fulfillment—and it damn sure has nothing to do with ping pong tables and free beer on tap.

We create a safe environment for the Tribe to ask questions, to share their opinions, and to push back on things they don’t agree with.

Why? Because a person should never make a mistake due to being made to feel that they can’t ask questions.

A culture like that makes people feel as though their thoughts, their work—that they, as people—are valued.

That feeling of being valued—especially in their place of employment—I’m learning, is even more rare than I thought. So many of our new Tribe members come to us from the corporate world TERRIFIED to ask questions.

When they find out that their questions and their opinions matter—that THEY matter—that’s when I see people that look forward to Mondays because there is a sense of fulfillment in their work.

If I want to lead a company where people want to stay, I have to recognize that the responsibility lies with me, not the Tribe, to create and maintain a culture where they ARE valued and fulfilled—never just satisfied.