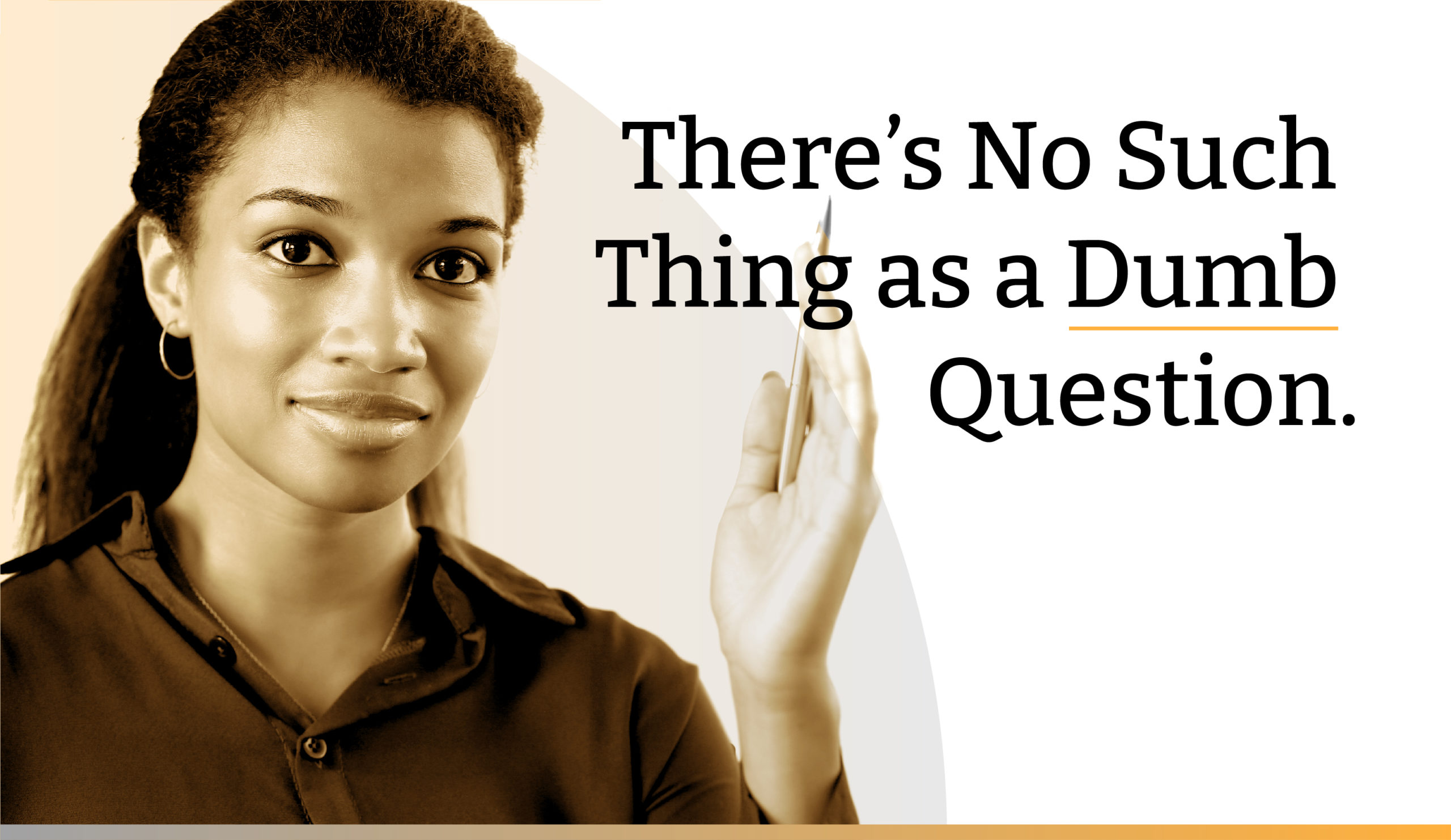 The new Tribe Member stood in front of our co-founder and dropped two black trash bags on the ground.

Our co-founder looked at the Tribe Member, then down to the trash bags.

“What the hell is this?”

“These are the binders for the Guided Author workshop,” the Tribe Member said. “You asked me to bring them.”

The new Tribe Member didn’t know what to say.

They told me the story the next day. At first I laughed, then I asked the Tribe Member: “Why didn’t you just ask someone what to carry these binders in?”

He looked down. “I didn’t want to ask a dumb question.”

Finally, I understood. “There’s no such thing as a ‘Dumb’ Question in Scribe. But we can take Dumb Actions. Next time, ask the ‘Dumb’ Question and leave the trash bags behind.”

The Value of “Dumb” Questions

Every question has value—even so-called “Dumb” Questions. In an organization as complicated as Scribe, we encourage everyone to ask questions all the time. It’s the best way to ensure everyone understands what we’re doing.

I’ve had plenty of people push back on that, asking me: “What if someone asks the same question over and over again?”

“It’s still a good question because I’m learning something in the process: the person asking the Repeated Question isn’t understanding my answer.”

In that case, I’m either:

Not explaining myself well enough, or
The person doesn’t care to learn the answer

If I hear a Repeated Question, the person asking isn’t the “Dumb” one—it’s me, either for not explaining my answer well, or for surrounding myself with someone who doesn’t care to learn.

We’ve all been there: you’re in a meeting, conference, or lecture, and you’re lost. You have a question, but you don’t speak up.

Why? Because you’re afraid of looking Dumb.

Then someone else raises their hand, asks the same question, and you breathe in relief because someone else spoke up.

Worse yet, NOBODY speaks up and the question goes unasked.

Here’s a rule I encourage everyone in Scribe to follow:

Every time you have a question in your head, and you’re nervous to ask it for fear of looking Dumb, there are three to five other people in the room with the same question.

If you’re ballsy and bold enough to ask the question, those other people in the room will sigh in relief.

In Scribe, we feel so strongly about asking questions (“Dumb” and otherwise) that it’s one of our Principles.

Most companies in Corporate America are not set up to encourage people to ask questions. You get fired for asking too many questions. Not us—we’re the exact opposite.

You can get fired if you don’t ask ENOUGH questions.

Why? Because we value Learning, and you can’t learn anything if you don’t ask questions.

And some of the best learning comes from asking so-called Dumb Questions…not just for our Tribe Members, but for me too.

Their questions give me insight into problems in the company I didn’t even know existed.

A simple example to illustrate:

Our office is full of books. If our Operations Coordinator comes to me and says, “Where do our new books go?” and I say, “On the shelf in our big conference room,” I’ve answered the question.

Then, two weeks later, the Ops Coordinator asks me the same question again.

Now, the first time she asked, it was a fair question. After the second and third times, I have to ask the Ops Coordinator a question of my own:

“Okay, now you’ve asked me the same question 3 times. That’s fine, we’ve made Asking Questions a company Principle for a reason. But I might not be explaining myself clearly. What’s going on?”

“There’s not enough shelf space in the big conference room for all of the new books we’re publishing.”

Boom. From a seemingly “Dumb” Question, we learned about a problem that we didn’t even know existed (and something about the Ops Coordinator). That’s the value of creating a culture where anyone can ask questions.

If you’re sick of people asking “Dumb” Questions, take a look in the mirror…

You may be giving “Dumb” Answers.

If I hear seemingly simple or Repeated Questions, I know I’m not explaining myself clearly, there’s a problem in the company I don’t yet know about, or what I’m explaining is too complex to give an easy-to-understand answer.

Whatever the case, allowing people to freely ask “Dumb” Questions allows us to learn faster and give Smarter Results.

Not asking “Dumb” Questions gets you “Dumb” Results—like a trash bag full of binders.
_____

No BS, no spam, and no sales funnels. Just honest and actionable Leadership Lessons in your inbox every week:  http://jevonmccormick.com/join