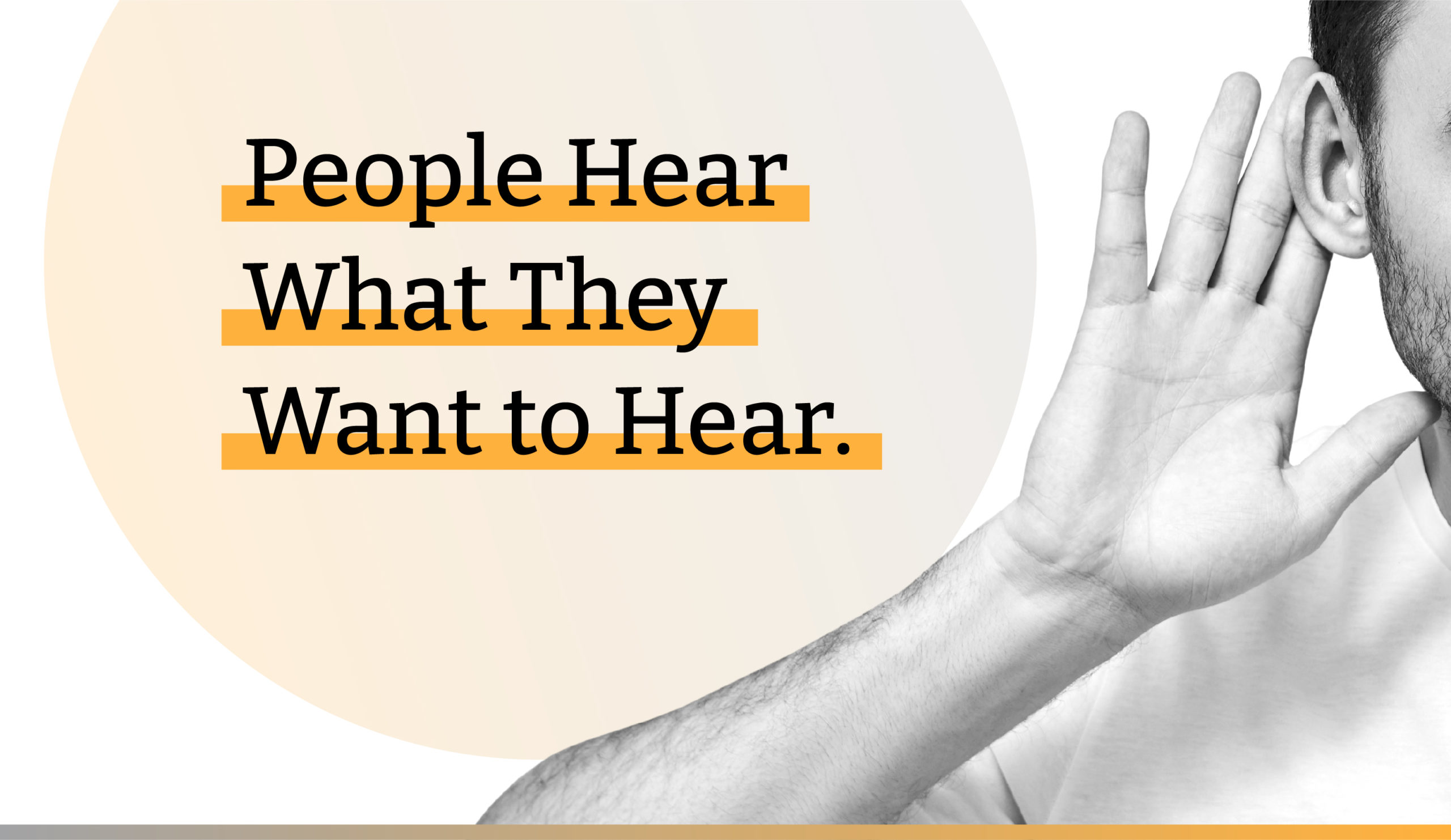 I told my daughter, “We might go to the bouncy house place this weekend.”

As it tends to happen in our lives, something came up, and we could not go.

My daughter was NOT having it. She didn’t hear that we “might” go to the bouncy house place. She heard:

“We are going to the bouncy house place.”

If you’re a parent, you’re probably nodding your head right now, because you know exactly what I’m talking about.

Every one of us has had that phone conversation with their cable company where they tell us they’ll be at our house between 12 and 4 pm that afternoon.

Are we patiently looking out our window at 3:55?

We’re checking our watch at 12:05, wondering where they are.

It’s a simple fact: people hear what they want to hear.

It’s especially true in business, particularly when ranges are involved. If we tell an Author their book will be finished in seven to nine months, God help us if we’re even one week over seven months—even though that is well within that range.

In our minds, we still have two months to go, but to that author, it’s already a week late.

Even though we give them a range, they will always hear the number that favors them.

It’s human nature. We all do it. Being aware of that fact can make us better at using ranges in our business dealings. The knowledge that people only hear the number that works in their favor is a powerful piece of information.

But why bother giving ranges at all, especially when they leave an opening for misinterpretation?

Because it’s fairer to the person with whom you’re working, and you give yourself an opportunity to shine as an added bonus.

If I tell an Author it can take up to nine months to complete their project and we deliver in seven, they’ll be ecstatic.

I haven’t actually given any different information. “Up to nine months” is still a range—but now I control the narrative and set the expectation by not giving them a lower number to focus on.

Better still, in some instances, I’ll change the time from months to days. For example, 90 days sounds quite a bit shorter than 3 months. On the flip side, 120 days sounds like forever and a day compared to 4 months.

Why? Because $95,000 is what they are going to hear. I’ve inadvertently set an expectation for them that might ultimately be unfair.

However, if I start with a number lower than or at the level of what I know we can comfortably offer, I will surprise and delight them when I deliver at a higher rate.

You might think this sounds deceptive, but it’s not.

Social intelligence and understanding the way people think is critical to doing business fairly and in a way that makes your customers—both internal and external—pleased in the process.

I keep this in mind not only in business, but now every time I think about how to tell my daughter about the bouncy house, We both end up happier for it!

No BS, no spam, and no sales funnels. Just honest and actionable Leadership Lessons in your inbox every week:  http://jevonmccormick.com/join