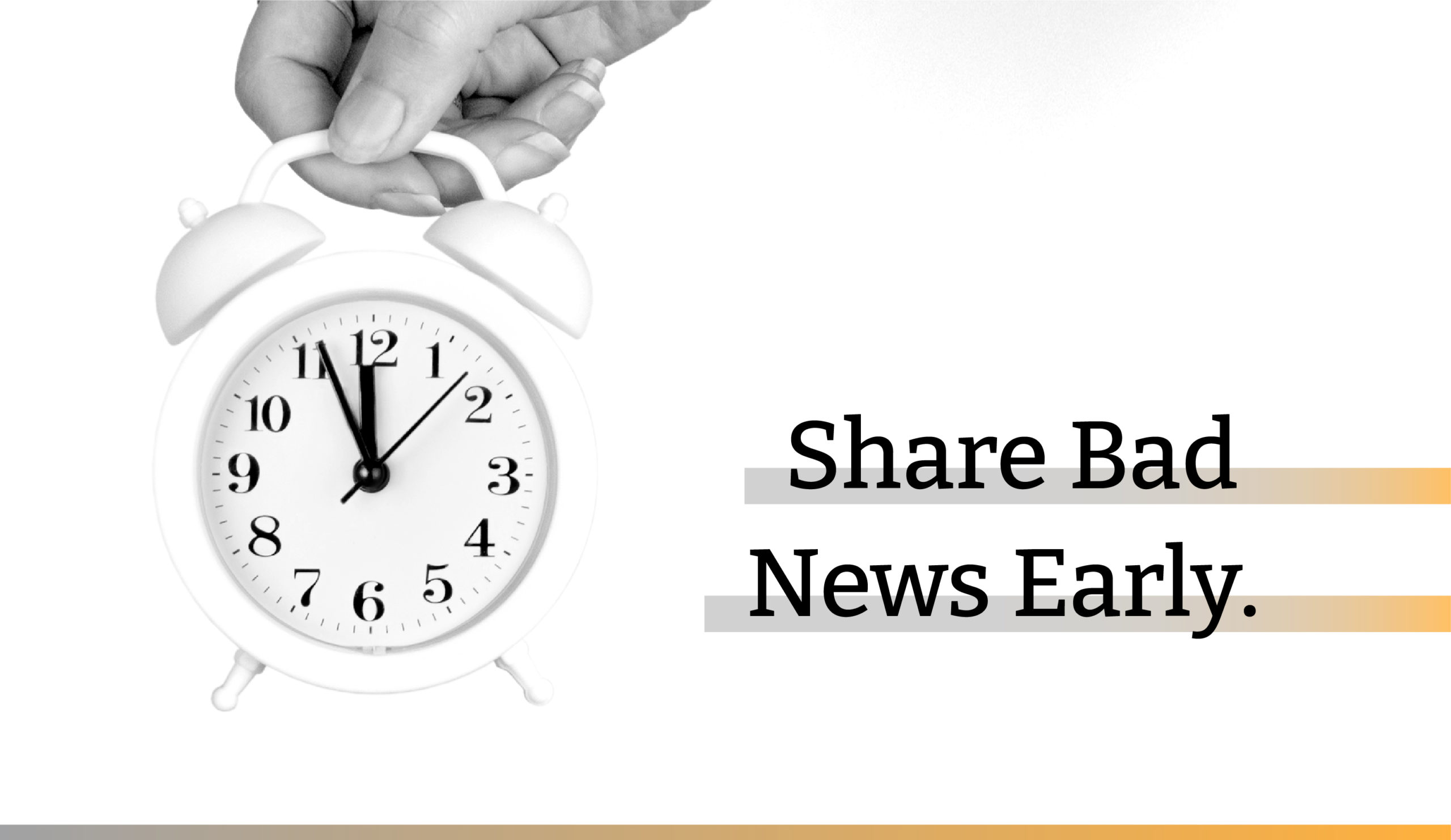 Her heart sank to the floor.

And she saw a VERY large unexpected charge.

She came to me. “What do we do? That charge comes out of his royalties. His book already sold out of its first run of copies. Now what?”

“We tell him. And we tell him as soon as possible.”

We noticed that charge on a Thursday. He was expecting to get his next payment on Tuesday. Most companies would let their client get excited about that all weekend, then wait until Monday to give them a call.

They’d say: “Hey, you know that check you’re getting tomorrow? You’ll see less than you were expecting. Have a great day!”

What do you expect your client to do? Especially with someone like Goggins, I wouldn’t want to see that response, HaHaHa!

Bad News Shouldn’t Be a Surprise

Here’s how it goes normally:

You find out about the bad news.

You keep it from the customer while you scramble to solve the problem first.

You can’t solve it.

You wait until the 11th hour to tell them the bad news.

Or even worse, you don’t tell them at all.

Your customer finds out about the bad news as a surprise.

They don’t know they’re not getting the deliverable when they thought they would.

They spent all weekend getting excited, telling people about what they were expecting, then the day before, you hit them with the bad news.

When you tell them the bad news immediately when you find out about it, two things happen instead:

Here’s what I mean…

If a vendor you worked with told you something bad would happen next week—they couldn’t get their shipment to you on Tuesday like they’d promised—you’d understand, as long as they gave you enough warning.

But what if they gave you that heads up and STILL delivered on time?

The problem is that too many companies want to hide it from clients and scramble behind the scenes to make sure they never find out.

Tell the person that they won’t get their deliverable on time, continue hustling in the background to fix the problem, and if you can fix it on time, you get to delight them.

In fact, you make them happier than if you’d just given them the deliverable according to plan.

But if you can’t make it happen, you haven’t lost their trust—you’ve earned it, because you were honest about the problem early.

That’s how you get people to thank you for bad news.

Lemme give you an example: I was checking into a hotel with my wife and our kids. We had all of our bags rolled up to the front desk.

The clerk looked at her system. “I’m sorry Mr. McCormick, but your room won’t be ready until 5 p.m.”

I was blown away.

If they had let me know just hours—not even days, but hours—before, and called to say, “Your room won’t be ready on time,” I could have made other arrangements. I would have felt no ill will toward this hotel chain (which I really like)—I would have actually been delighted by their honest and early communication of the Bad News.

Instead, I had a group of four little kids and a half dozen bags all standing there, the kids about two seconds away from opening up those bags and throwing their clothes and toys all over the lobby.

Frankly, I was about four seconds from doing the same thing.

The hotel didn’t tell me the bad news early because they thought it wasn’t something their guest would want to hear. They were wrong.

You know what your customers and employees want to hear?

They want to hear the bad news—as quickly as possible, not at the last second, so they can prepare.

Tell people bad news IMMEDIATELY. They will be Grateful, not Mad.

That’s what happened when we called David about the unexpected charge. His response?

“Thank you for letting me know immediately!”

Can you imagine his response if we waited until the last minute? Or even worse, if we didn’t call AT ALL?

We care too much about our Authors (and our Tribe) to deliver bad news at the last minute.