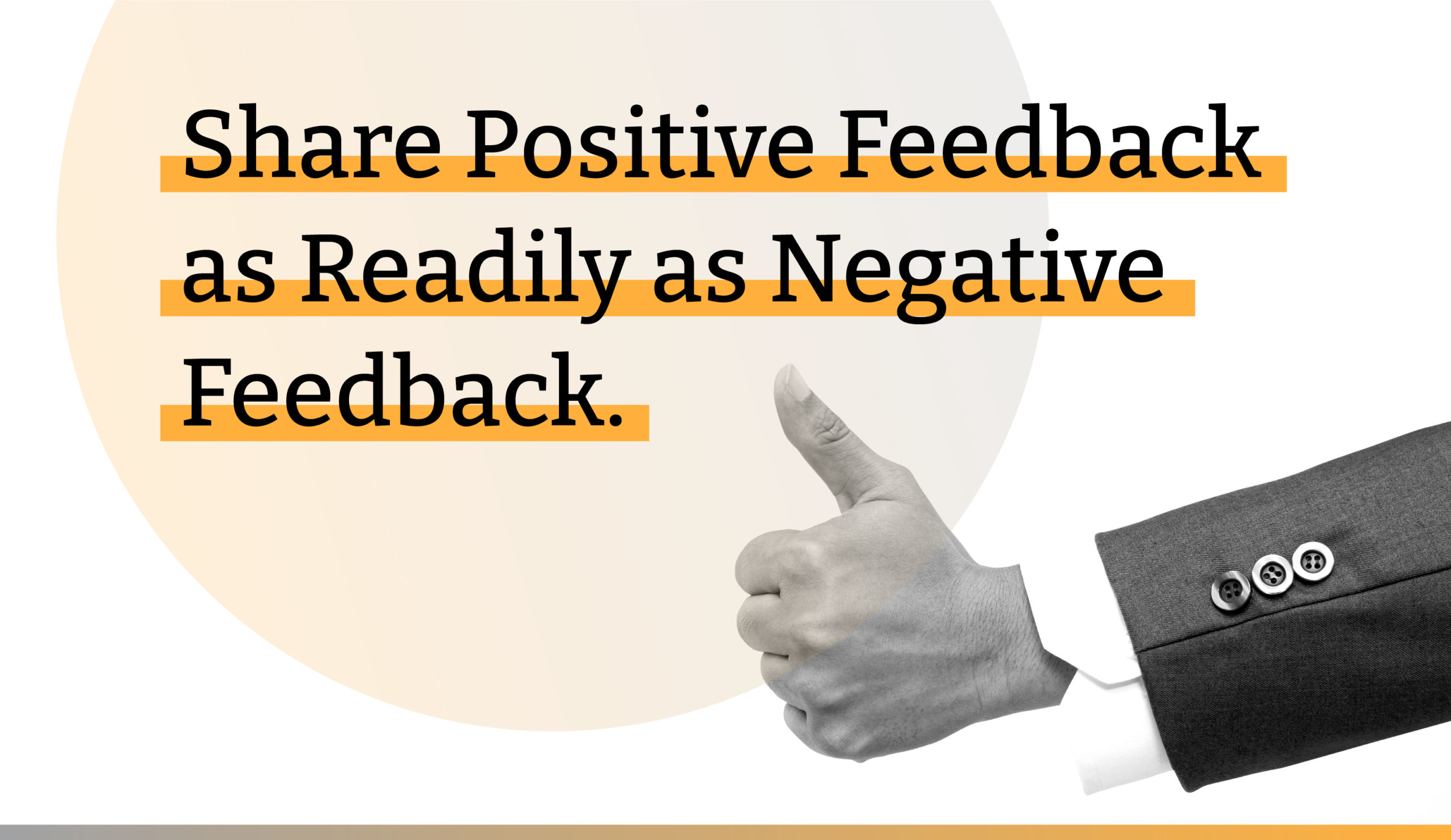 We live in a negative society. Frankly, that bothers me. A lot.

Watch the news—another shooting, another robbery, another car crash.

People in our society are so quick to post negative comments about other people and companies.

If one of your customers has a negative experience, they turn into a bloodhound, sniffing out your email so they can send their thoughts, call you with complaints, or post a negative comment online.

It’s disheartening—because it seems to only work one way.

How quick are you to hunt down a company’s contact info when something goes RIGHT?

Despite what we see represented in our society, I try to give positive feedback as quickly as I give negative feedback.

Our Focus on the Negative

You pay a roofer to fix a leak in your roof.

No problems for a few weeks. Then, during the next big thunderstorm, you hear it: the familiar drip of rainwater plopping on the bathroom tile.

You go to your computer immediately—before you’ve even put a bucket below the leak—and sniff out the roofer’s Google Business listing. You write a 1-Star review with so many ALL-CAPS words and exclamation points it looks like the ravings of a madman!!!!

And you know what? That may be true. You have every right to expect the work to be done correctly.

But let me ask you this:

If the work had been done correctly, would you have been so quick and passionate with Positive Feedback?

I’m not saying you should ignore the bad stuff—not at all.

I’m saying we as individuals focus on the negative, and it would be better to focus at least as much on the positive.

You see this represented in the media all the time…

When an athlete gets pulled over for possession of marijuana, or gets caught with a prostitute, or gets in a fight at a nightclub, the whole world is eager to tell you about it.

Are we just as eager to tell each other about the other athlete who takes a group of kids to Disney World as part of their Make-a-Wish?

Where’s that story in the breaking news?

Nowhere. And why not?

Because the Make-a-Wish story doesn’t get the views or clicks that the busted athlete does. Because we focus on the negative as a society.

When was the last time you ate out and had an excellent server? Did you go up to the general manager and say, “Derek was incredible tonight. You’re fortunate to have him working here”?

If you do, I’m truly impressed. You are making the world a better place, and I congratulate you.

But you are in the minority.

For the rest of us who have to make a conscious effort to be positive, think about this:

In fact, I’d say it takes More Effort to be negative than positive.

This all goes deeper than just giving feedback in company reviews.

Look at the feedback you give in your relationships.

The great majority of people are eager to complain about what their significant other is doing, versus focusing on the positives of what they’re doing.

And it’s easy to give someone positive feedback when they do something big.

But do you give the same feedback when they do something small?

Thank you for doing the dishes.

Thank you for taking the kids to school.

Most of us are more likely to tell our significant other we’re not happy with their work schedule, their cleaning habits, or their share of the caretaking duties.

Again: we focus on the negative.

When I worked with a software company, everyone regularly gave reviews of the company.

In one instance, an employee had Glowing Remarks, but he gave a 4/5. He put his name next to the final score, saying I should come to him if I had questions about his feedback.

I asked him why he wrote 4/5 after such amazing feedback.

He said, “I don’t care what it is, or how great something is, I never give anything a perfect score.”

I had never heard anything like that before. But since then, I’ve learned: there is a section of our society that will NEVER give a perfect score.

That, to me, is an unfulfilled life.

And even if they’re not, you can still share positive feedback. It’s easier on you than focusing on the negative.

Think about that next time you’re watching the news, or when a company messes up in your experience, or your significant other does something you don’t like…

Would you be as eager with your feedback if you had a good experience?