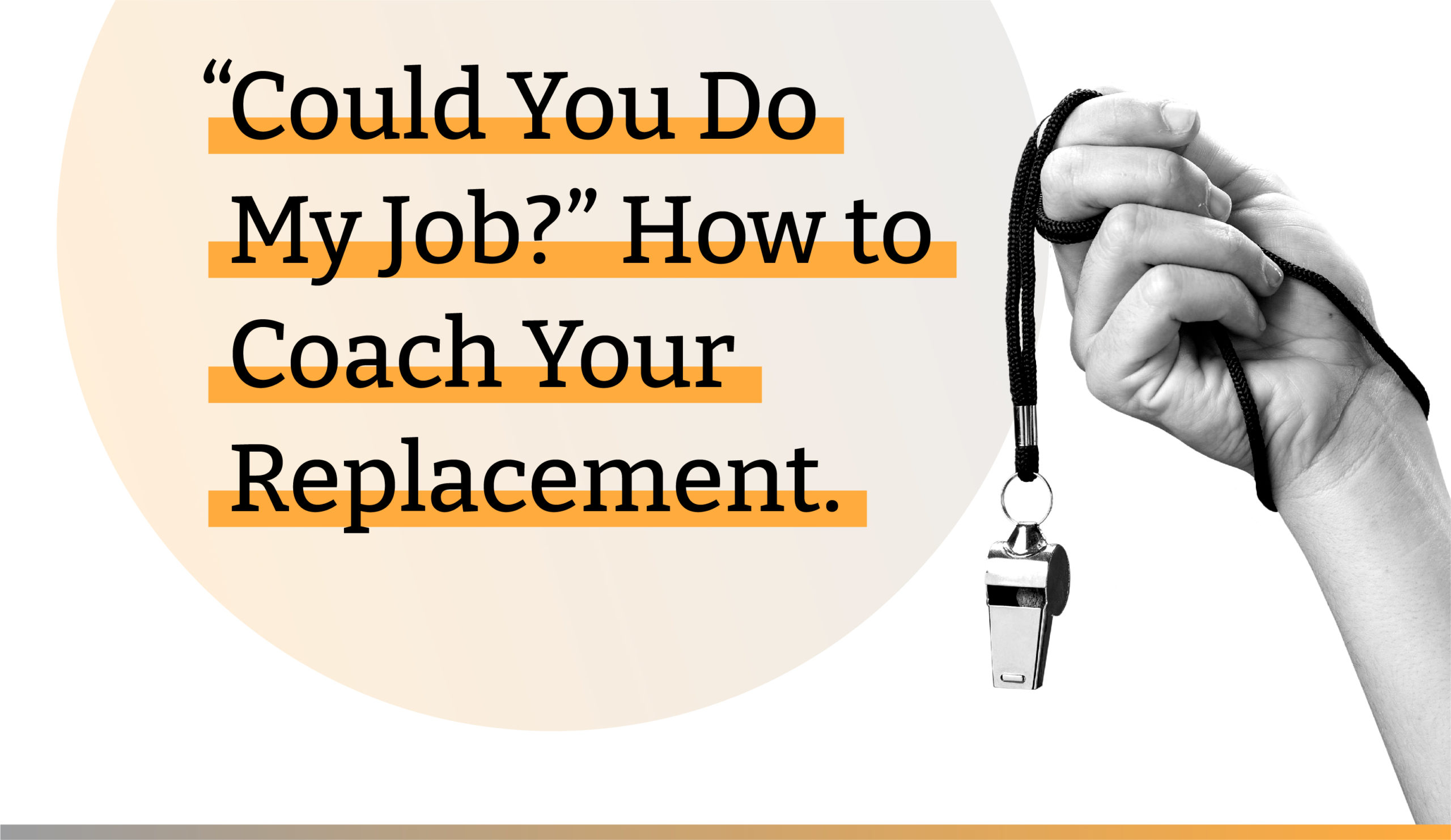 She calls them “5am wake up calls,” but I prefer to call them “scenario testing.”

Once a month, I make a morning call (not at 5am) to Scribe’s Director of Operations and throw a scenario at her. The kind she’d have to handle if she were COO:

“You just walked into the office. The co-founders are gone, you can’t get ahold of me, and three people just quit. What do you do?”

The first time I called her, I heard nothing but stunned silence on the other end of the line. She had no idea what to do.

I didn’t blame her for not knowing what to do in that scenario. As surprising as it sounds, her response was entirely MY FAULT.

She didn’t know what to do in that situation because I never coached her on how to replace me.

Sadly, most CEOs (or leaders at any level) don’t coach anyone to replace them. That doesn’t make it any better. Matter of fact, not coaching your replacement is one of the biggest mistakes business leaders make.

Have you ever wondered why amazing CEOs, and leaders of all kinds, don’t leave behind amazing CEOs after they leave?

Most CEOs (or leaders at any level) want to be the smartest person in the room. They’re AFRAID to coach people to be better than them.

It’s a scarcity mindset that keeps people from teaching their replacement. They think, “I’m not going to teach someone how to take my job, that’ll make me replaceable.”

Beyond that, the real hard truth is, you can’t teach someone to replace you if you don’t know what you do. And, frankly, most people have NO DAMN CLUE what they’re doing.

But here’s what they miss. You don’t grow a company around a single individual. You build it around a tribe of people, all of whom are smart, capable and well-coached.

Otherwise, when that person is gone, everything collapses.

You always want a backup plan in place, and that backup plan is surrounding yourself with people who are capable of doing great things, and that you have coached to be better than you.

That’s the secret to leaving behind amazing leaders: you teach people to do their job so well, and your job so well, that they can do it without you.

Then they’ll teach the next generation even more. And on it goes…without you.

Most people in corporate America don’t approach it like that. They see it from a scarcity mindset: Why would I coach someone to take my job?

Your company will be built around you, and when you’re gone, it will crumble. Because if you don’t coach your replacement, your company will die with you. And your legacy will begin and end with you.

If you surround yourself with people who are better than you, and coach them to replace you, your company won’t crumble after you’re gone.

It will only get better.

So how do you coach people to replace you?

I ask if they could do their boss’s job.

[First off, nobody in Scribe has a boss. We have direct support. But for the sake of this post, let’s call it a boss.]

It’s not enough for me to coach my replacement. I ask people in Scribe if they could replace their boss.

I do this to coach people to think about their jobs the same way: what do they need to learn in order to do their boss’s job?

In that way, everyone is constantly learning to be better, and teaching their replacements.

That’s why I scenario test with our Director of Operations every month: for the day when I ask her if she could be the COO, and she says yes.

After that first “scenario test” (okay, five am wake up call), our Director of Operations and I met in the office.

I asked her frankly. “Could you be COO?”

“I would have had no idea what to do in that scenario. How do we hire replacements for those three people?”

Now when I ask our Director of Operations what she’d do if she were COO and three people quit, she knows exactly how she’d handle it.

The best CEOs aren’t interested in being the smartest person in the room. They coach people to be better than them.